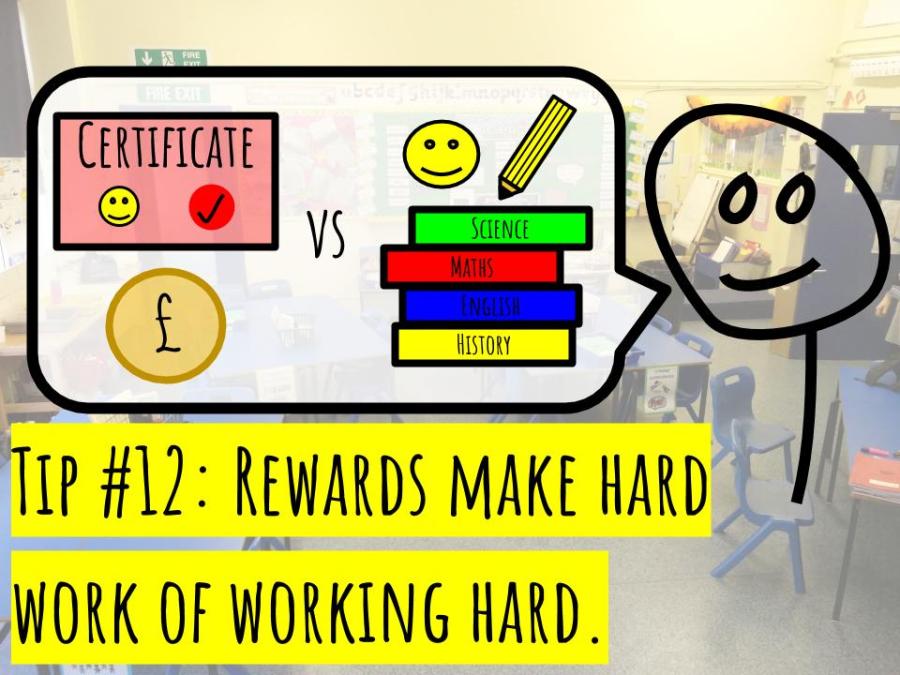 Rewards often work in the short-term and are recommended by education experts as a way to modify behaviour. However, long-term use of rewards damages motivation and makes working hard seem like hard work.

There was a time when I loved hoovering. I was still in primary school and it was fun to watch the vacuum cleaner suck stripes onto our hideous 1980s carpet. I used to do it every week until I became a teenager and needed pocket money – vacuuming became the sombre counterweight for the weekly sum of £1.50. Clean carpets very quickly deadened me from the inside-out.

What’s the difference between a hobby and work?

I wasn’t alone: as soon as you turn a hobby into work, it stops being fun. But what’s the difference? The reward for a hobby is the satisfaction of doing it. This is intrinsic motivation. The reward you get for doing work is extrinsic – you’re promised a reward beforehand in return for your labour so you work towards the dangling carrot.

We’d probably all like our pupils to behave well and be learn successfully for the love of behaving well and learning successfully. In reality, we’re probably all guilty of encouraging the latter, extrinsic motivation.

‘But the prize boxes and trips to theme parks work!’

These motivation-killing rewards come in many guises such as prize boxes, stickers, certificates or schemes such as these Vivo Rewards. At this time of the year (Summer term), end-of-year proms and theme park trips are seen as a rite of passage. Teachers and schools would argue that these rewards get results. They certainly do, but only in the short term – when the rewards cease to be dangled pupils are left with empty feelings of loss. The immortal words now ring in my ears: ‘But how come year 6 got this / them last year?’

Research support this idea too. In one study, children were promised a certificate for drawing whereas others weren’t rewarded at all. The rewarded children produced more drawings but of poorer quality compared to their usual standards. Weeks later, the rewarded children were found to drew less and took less care than those who weren’t rewarded at all (Loveland & Olly, 1979). These results have been replicated in many different domains and they all draw the same conclusion: in the longer term, rewards reduce intrinsic motivation. In other words, pupils will work hard to achieve certificates or theme park trips, but won’t do it again unless you keep dangling the carrot. This is bad news in the real world and for any plans of an enhanced growth mindset.

So what can we do?

We can combat the damage to intrinsic motivation by considering how we structure rewards. Spontaneous rewards given after an event will do little harm as it’s an unexpected bonus. Conversely, giving vouchers or certificates for reading or attendance says ‘we think reading and school are so joyless, we have to coerce you with treats.’

I suggest these guidelines for judicious reward giving:

These tips will help you to maintain motivation and promote a positive class climate. We want our pupils to develop grit and a love of learning that helps them to thrive in the world they grow up in. Therefore, we should limit rewards: they make hard work of working hard.